The FHVFD has completed two thirds of a lighting upgrade to our station. The FHVFD received GRANT dollars and underwent a major transition from four and eight foot T-12, fluorescent lighting to LED li...
➜
News
Information packet given to residents at last Monday's meeting or picked up at borough building...

We have reviewed the information distributed to residents either at last Monday's meeting or have been picked up at the borough building. We don't dispute that all of these documents are in fact correct as they relate to the FHVFD. However, we are not sure that they were in fact explained to most people's satisfaction.

The first page is a letter the FHVFD attorney did send to council members. As explained in an earlier post, this letter was sent after several unsuccessful attempts to get borough officials to meet with the FHVFD. No doubt that it is harsh, but it did the job and got their attention which was the intent. However, no meeting took place until nine weeks later in August because of "various scheduling difficulties" on the boroughs end of things. Three representatives from the fire department and our attorney met with three members of council. It was clearly stated at this meeting, with our counsel in attendance, that we were not in talks with Braddock Hills. The Borough's response to our letter indicates "Prior to your letter, Council representatives had informally (verbally) requested a similar meeting and did not receive a response." All members of council and the borough manager had been informed on several occasions dating back to the talks about the Fire Protection Services Fee in 2011 that all things related to the business side of the FHVFD fell to the President of our department. The Fire Chief is in charge of the operations as it relates to fire protection. This was simply ignored.

The second page is what we believe is the Fire Protection Services Fee Budget and the ladder truck lease payment schedule from the borough. This is not our document. Explanation would fall to the Borough. However, we will give our explanation as we see it in an up coming news item.

The front of the third page is a copy of a check made to Forest Hills Borough for Fire Relief Assn. This is a check from the Commonwealth of Pennsylvania and the Borough is required by Pennsylvania state law to distribute these funds to the Fire Department Relief Association. The Forest Hills Volunteer Firefighters Relief Association is a separate entity that runs in combination with a volunteer fire department. Every volunteer fire department has a Relief Association and only volunteer fire departments have relief associations. It is a separate entity, it has it's own Tax ID number, and is audited every other year by a state auditor. There are specific guidelines under which a Volunteer Firefighters' Relief Associations operates. There are strict regulations as to how these funds can be used, contrary to what has been stated by the Public Safety Committee Chair. Not every borough receives the same amount of relief funding. Pennsylvania collects the money from insurance companies that do business in Pennsylvania but are not headquartered in Pennsylvania. The money is divided by a formula based on how much "foreign fire insurance" money is collected and is regulated by the Auditor Generals office.

The back of the third page is a bill for the flat roof portion of the fire house. The Borough did indeed pay for this as pursuant to the lease agreement in regards to the fire department building.

The front of the fourth page is a letter sent to council in March. However, the notation typed at the bottom is not ours. Yes the presentation was given to Braddock Hills on March 20. The Public Safety Chair was informed via a phone call that this was happening and that it was only a presentation of what FHVFD had to offer. This presentation entailed information regarding the fire operations aspect of the fire department, there were NO talk of any money/dollar amounts. Braddock Hills Council was informed that this would be a long process, that these things did not happen overnight, and that all parties (both councils and both fire departments) would need to be involved.

The fifth page is the Fire Protection Services Fee as original and as amended.

The front of the sixth page is one page from the lease agreement that the fire department has with the borough. 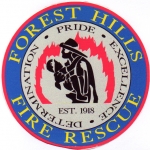 This site has been viewed 177,554 times.
Calls
News
Events
Pictures
Apparatus
FollowTweet
Maintained by the members and staff of Forest Hills Volunteer Fire Company. Designated trademarks and brands are the property of their respective owners. Copyright © 2006-2022. YourFirstDue Inc. All Rights Reserved. Content on this web site is supplied by Forest Hills Volunteer Fire Company. YourFirstDue Inc. cannot be held responsible or liable for any content, text, pictures, or any other media found on this web site.
Management login
Powered by